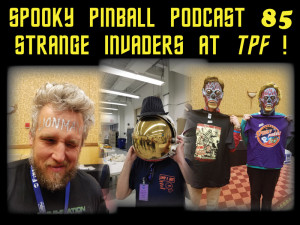 We’re off to Frisco Texas once again for the Texas Pinball Festival! You’ll hear interviews with Joe Balcer of American Pinball, show promoter Ed, Sam “Flash Gordon” Jones, Martin from Pinball News, and even a bit of pirate like chanting from Steve Ritchie. If that doesn’t trip your trigger, you’ll also hear Scott Danesi & Jack Danger as they get Totally Annihilated! Learn more about the home brew game that is catching the pinball world by surprise with its retro awesomeness. Plus you’ll hear about our big plans with Svengoolie at the Midwest Gaming Classic and Rob Zombie #300 that is being auctioned off for charity… and the pinball movie premiere of “Things That Go Bump In the Night“. We’ll also talk about our new game announcement, “Alice Cooper’s Nightmare Castle“. Plus EM Dungeon, Adventures of Lionman… AND LOTS MORE!!! Tons to talk about, so quit reading and click that play button fellow pinball crazy listeners!!!

Visit our SHOP page to purchase machines and merch!